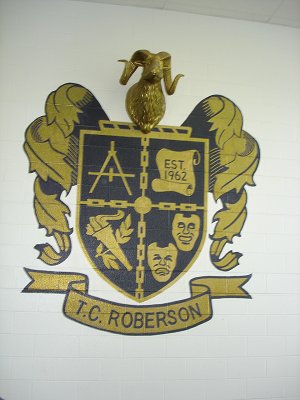 TC Roberson High School, a consolidation of Valley Springs High School and Biltmore High School, opened its doors to students of the surrounding communities of Skyland, Arden, Avery's Creek, and Biltmore on August 24, 1962. The school was named in honor of the former superintendent of Buncombe County Schools who served from 1935 until 1969. The achievement of the countywide consolidation program, the construction of many modern school buildings, and the improvement of the instructional program are some of the accomplishments attributed to Mr. Roberson during his term of office.

The brick building included a small auditorium seating 250; a library; a cafeteria; areas for business, mathematics, science, social studies, English and foreign language classrooms; and an administrative section. In 1965, a gymnasium-auditorium was constructed, costing approximately $350,000. Mr. Anthony Lord of Six Associates of Asheville served as chief architect. A consolidated vocational area for a child care laboratory facility, agriculture, and trade and industrial arts was incorporated with new addition in 1984.

In 1993, the renovation of T. C. Roberson High School began with a three phase operation, which incorporated three buildings into one. Many buildings were renewed, while others were razed and then reconstructed. Areas of renovation included the gymnasium, the cafeteria, the counseling offices, the vocational department, the English department, and conversion of the art/band area into the weight room, and the Little Theatre into the art room.

The new construction included administrative offices, media center, math department, health occupations, home economics, science department, and the performing arts center with its band, chorus, and theatre. The total cost of this renovation and construction was approximately $7,450,000. An addition to T. C. Roberson High School was the advent of the Progressive Education Department at a cost of approximately $4,639,000.

By the beginning of the 2003 - 2004 school year,another construction addition gave us eight new classrooms, a new auxiliary gym, teacher offices and assistant principal office, more storage for our ROTC program, and new restrooms. This new addition gave us a little more room to expand. T. C. Roberson now has an area of 261,000 sq.ft.

At the start of the 2007-2008 school year the newest construction project was completed.  With the need of more room in the cafeteria and the growth of the student body, the cafeteria was expanded by 250 seats and a new wing with 18 classrooms, known as the "Freshman Academy",  was added onto the school.  T.C. Roberson incorporated the FIRST Freshman Academy in Buncombe County Schools with this new building.